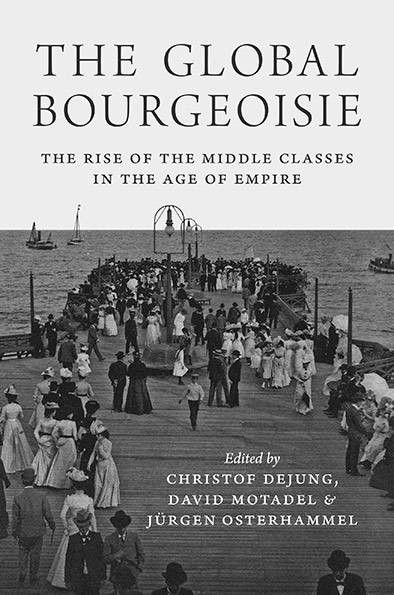 THE GLOBAL BOURGEOISIE: THE RISE OF THE MIDDLE CLASSES IN THE AGE OF EMPIRE

While the nineteenth century has been described as the golden age of the European bourgeoisie, the emergence of the middle class and bourgeois culture was by no means exclusive to Europe. The Global Bourgeoisie explores the rise of the middle classes around the world during the age of empire. Bringing together eminent scholars, this landmark essay collection compares middle-class formation in various regions, highlighting differences and similarities, and assesses the extent to which bourgeois growth was tied to the increasing exchange of ideas and goods. The contributors indicate that the middle class was from its very beginning, even in Europe, the result of international connections and entanglements.

Essays are grouped into six thematic sections: the political history of middle-class formation, the impact of imperial rule on the colonial middle class, the role of capitalism, the influence of religion, the obstacles to the middle class beyond the Western and colonial world, and, lastly, reflections on the creation of bourgeois cultures and global social history. Placing the establishment of middle-class society into historical context, this book shows how the triumph or destabilization of bourgeois values can shape the liberal world order. The Global Bourgeoisie irrevocably changes the understanding of how an important social class came to be.

‘This fascinating book offers readers a genuine global history of social stratification and class structure. A must-read.’
— Thomas Piketty, author of Capital in the Twenty-First Century

‘The first comparative history of the global bourgeoisie, this tour de force opens new vistas on the modern era’s most powerful social class. Taking us into the worlds of Chinese textile industrialists, Ottoman merchants, bourgeois Muslims in Berlin, and Bengali economic elites, among others, the authors chart how a connected but hierarchical bourgeoisie emerged in the nineteenth and twentieth centuries. This milestone of a book demonstrates the great promise of global social history.’
— Sven Beckert, Harvard University

‘The middle classes have long been studied in their own national contexts. This rich collection of erudite, perceptive essays marks a radical departure from that tradition by producing a global history of these classes. It pays scrupulous attention to imperial and universal connections without flattening out any of the historical particularities. Not an empty provocation, the title of this book invites and helps readers to focus on the shared disposition of the middle class. A timely intervention.’
— Dipesh Chakrabarty, University of Chicago

‘The arguments and content of this exciting and groundbreaking edited volume are new and original. Looking at Europe, North America, Africa, the Middle East, South America, the Indian subcontinent, and East Asia, The Global Bourgeoisie’s breadth and range is truly impressive. Historians concerned with class, imperial and bourgeois cultures, global and transnational history, area studies, and the nineteenth century will be interested in this book.’
— Gareth Curless, University of Exeter

‘The Global Bourgeoisie provides a comparative view of the middle classes and bourgeois cultures that emerged during the nineteenth century. Examining their interconnections, differences, and similarities, this seminal reference gives a profound inside look into diverse parts of the world.’
— Angelika Epple, Bielefeld University

‘This ambitious book will attract a wide readership and not only among those interested in global history. Specialists in many regions around the world will find work pertinent to their scholarship and benefit from the volume’s many comparisons and approaches to class formation.’
— Harry Liebersohn, University of Illinois, Urbana-Champaign

‘The fourteen case studies that comprise this important and enlightening collection—there is also a superb introduction by the co-editors and a more theoretical concluding essay—examine the nineteenth- and twentieth-century bourgeoisie wherever it appeared, be it the Ottoman Empire, India, Iran, China, Japan, East Africa, the United States, and even, occasionally, in Europe. This volume offers a rewarding, thought-provoking deep dive into what it meant to be middle class and how the middle class(es) operated…this is a very important book that makes abundantly clear that the emergence of the middle class and bourgeois culture in the nineteenth century was by no means exclusive to Europe or even necessarily emanated from Europe.’
— Jeffrey Auerbach, WORLD HISTORY CONNECTED – Read Review

‘The Global Bourgeoisie, a remarkable anthology edited by historians Christof Dejung and David Motadel. They are joined by Jürgen Osterhammel, a pioneer in the field whose magisterial work on the global nineteenth century looms large over the present work…The contributors offer case studies that come together to form “the first truly global survey of the history of the bourgeoisie”…their collective efforts to define and assess the emergenceand development of a bourgeois elite certainly creates a viable model for future global social historical research and stands on its own as an impressive scholarly achievement…The book is remarkably well constructed…The impressive breadth of the chapters is matched by a sense of analytical depth stressing the connections among global bourgeois elites and comparisons of the characteristics, behaviors, and visions that cut across national cases… In this way, the authors create an image of the global bourgeoisie as a pastiche, shaped by common processes but manifesting across the globe with unique,regional characteristics…Reading The Global Bourgeoisie affirms the view that global history as a subfield has matured remarkably over the last three decades. The old challenges of breadth and diversity that formerly gave historians pause and kept them locked in the well-worn habits of nation-state historiography seem to have been overcome not only by methodological innovation and a growing body of work, but also by the successful community-building efforts among academics. This book would never have been possible without the close cooperation of so many dedicated scholars, who lent their expertise and training to the pursuit of large, time-intensive, aggregated projects. Its success stands as a reminder that institutions and funding agencies would be well served to support and recognize such collaborative work.’
— J. Laurence Hare, INTERNATIONAL SOCIAL SCIENCE REVIEW – Read Review

‘One of the major intellectual projects in central European history during the last two decades of the 20th century was the study of the Bürgertum…Since that time, global history – global in expanding the comparative perspective outside the wealthier countries of the North Atlantic, but also in placing world-wide interactions at the center of historical structures and developments – has become steadily more influential. The current volume, a collection of essays based on a workshop held in Cambridge in 2015, is an attempt to take the Bürgertum project global.’
— Jonathan Sperber, FRANCIA RECENSIO – Read Review

‘The nineteenth century has long been regarded as the ‘Golden Age’ of the bourgeoisie in Europe. Transnational and global historical perspectives have added greater nuance and breadth to this picture in recent years. ​Current research emphasises the similarities in the evolution of the nineteenth-century middle classes and bourgeois milieus around the world. Christof Dejung, David Motadel and Jürgen Osterhammel’s 2019 anthology provides us with the first comprehensive results of this new research field. This ambitious study assembles contributions from international experts on the social structures, actors, ideas, connections and networks of European, American, South America, African and Asian middle-class groups and milieus, predominantly across the ‘long’ nineteenth century…In their nuanced, elegantly written introduction, ‘Worlds of the Bourgeoise’, Dejung, Motadel and Osterhammel illustrate the differing sociological and cultural characteristics of the middle classes…The anthology offers the reader a fascinating, impressive picture of the “global bourgeoisie”. Taken together, the cohesive body of contributions – based on original sources such as contemporary travel reports, newspapers, autobiographical texts, scientific publications, and administrative and trading documents – demonstrate that a historical understanding of the middle classes as a European or Western phenomenon does not do justice to its global historical character.’
— Ruth Nattermann, H SOZ KULT (Translation) – Read Review

‘Three world-renowned public intellectuals and social scientists – Thomas Piketty, Sven Beckert, and Dipesh Chakrabarty – praise this essay collection in highly enthusiastic terms. And indeed, the feat of composing a global social history of the middle classes is deserving of praise and recognition, particularly given that, in the growing field of global history, such a project is no doubt a particularly difficult undertaking. ‘Global history meets social history’ could have been the subtitle of this anthology. The volume is an attempt to move away from a global history of migrants, brokers and global players to a global social history of classes and social groups. Therein lies, in my opinion, its particular merit…This research journey leads us around the world…Its framework could neither be more fundamental nor more encompassing; it also offers research goals and explanatory models for a future global social history.’
— Lutz Raphael, SOZIOPOLIS (Translation) – Read Review

‘The bourgeoisie has thus far been regarded as a particularly Western European social formation, which in the nineteenth and early twentieth centuries either was very sparse or did not exist at all in the United States, Russia and elsewhere. ‘The Global Bourgeoise’, edited by Christof Dejung, David Motadel and Jürgen Osterhammel, adopts an entirely different position: These European historians view the bourgeoisie as a global historical phenomenon, which also emerged outside of Western Europe…The anthology’s great achievement is the expert presentation of all of these original findings, producing an innovative, intelligent, readable, revolutionary work of global history.’
— Hartmut Kaelble, HISTORISCHE ZEITSCHRIFT (Translation) – Read Review